We are proud to present the recipients of the
2022 Sylvan Adams Nefesh B’Nefesh Bonei Zion Prize.

The award recognizes outstanding Anglo Olim
– veteran and recent –
who embody the spirit of modern-day Zionism
by contributing in a significant way to the State of Israel.

“The annual Bonei Zion Prize serves as a reminder of the remarkable impact that Olim are making in every facet of Israeli life. This year’s prize recipients, and the hundreds of thousands of Olim who have chosen to make Israel their home, are true examples of how the Jewish state is thriving.” 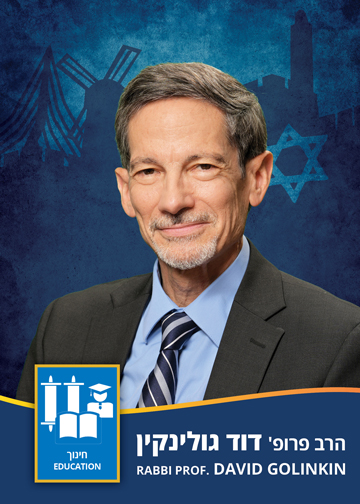 Rabbi Prof. David Golinkin was born and raised in Arlington, Virginia. He earned a BA in Jewish History and two teaching certificates from the Hebrew University of Jerusalem. He received an MA in Rabbinics and a PhD in Talmud from the Jewish Theological Seminary of America, where he was also ordained as a rabbi.

In June 2014, Rabbi Prof. Golinkin was named by The Jerusalem Post as one of the 50 most influential Jews in the world. In May 2019, he was awarded an honorary doctorate by the Jewish Theological Seminary.

Rabbi Prof. David Golinkin made Aliyah from Virginia in 1972. 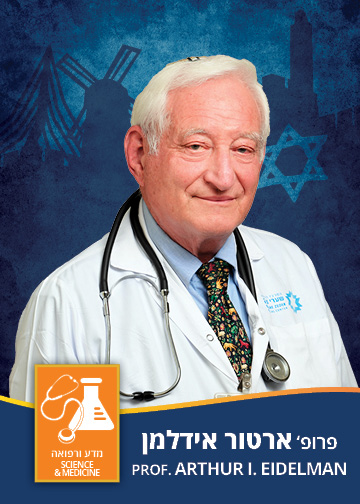 Prof. Arthur I. Eidelman, received a BA and BHL from Yeshiva College, an MD from the Albert Einstein College of Medicine, and trained in pediatrics and neonatology at the Yale University School of Medicine. He served in the U.S. Public Health Service as Lieutenant Commander of the National Medical Consultant for the Division of Mental Retardation. He established the Neonatal Intensive Care Unit at Jacobi Hospital and became the Director of Newborn Services and Assistant Director of Pediatrics at the Einstein College of Medicine.

In 1978, Prof. Eidelman established the first Department of Neonatology in Israel at the Shaare Zedek Medical Center. He is considered the “founding father” of neonatal medicine in Israel, setting the standards for the training and care of newborns. Prof. Eidelman became Chairman of the Department of Pediatrics at Shaare Zedek, Professor of Pediatrics at Ben Gurion University of the Negev and the Hebrew University School of Medicine, and he is a Visiting Professor of Pediatrics at Einstein. He has pioneered the development of care practices for newborns and infants worldwide.

Prof. Eidelman served as International Editor of the Journal of Perinatology and is the Editor-in-Chief of the official journal of the Academy of Breastfeeding Medicine. He is the co-lead author of an AAP Policy that sets the standards of practice for breastfeeding worldwide. Prof. Eidelman currently serves as the scientific coordinator and advisor to the Dream Doctors project of Medical Clowning, where he has pioneered the development of medical clowning as a paramedical specialty within the modern health care system. Prof. Eidelman is married to Arleen (nee Pilzer) and has four kids and nine grandchildren.

Prof. Arthur Eidelman made Aliyah from New York in 1978. 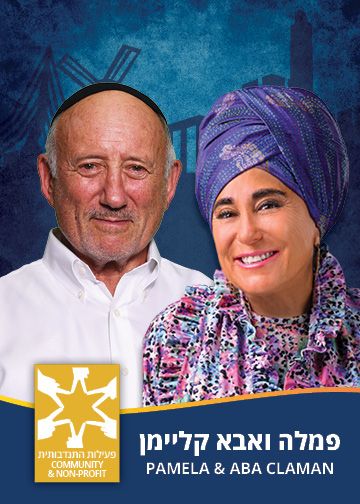 Pamela and Aba Claman are the co-founders of Thank Israeli Soldiers, an NGO dedicated to educating, embracing, and empowering Israel’s soldiers from the beginning of their service through transition into civilian life. Aba is an entrepreneur, attorney, philanthropist, and a graduate of UCLA and Harvard Law School. Pamela is a philanthropist and community volunteer dedicated to developing and supporting programs to help unite and inspire the Jewish People.

The idea for Thank Israeli Soldiers was inspired in 2001 when the Clamans delivered Rosh Hashanah dinner to soldiers on guard duty in their neighborhood. Since then, the organization has grown to include a soldiers’ center in the Old City, which hosts thousands of soldiers annually, as well as numerous strategic programs that have assisted tens of thousands of soldiers throughout their service, including educational programs to connect them with Israel’s history and heritage, care packages, and Shabbat experiences. In 2010, the Clamans created IDF MOMENTUM, a premier transition program that places an emphasis on post-army transition and has reached over 65,000 soldiers. In partnership with IDF Manpower, IDF MOMENTUM facilitated “Back to the Future,” an initiative that was awarded the 2021 Chief of Staff’s Award of Excellence for innovative thinking.

Pamela and Aba are founding supporters of the international women’s movement MOMentum, an organization that empowers women to change the world through Jewish values. They co-produced several films about the experience of IDF Soldiers, most notably, Beneath the Helmet and When the Smoke Clears. They have piloted an innovative environmental program through the Haredi school system. 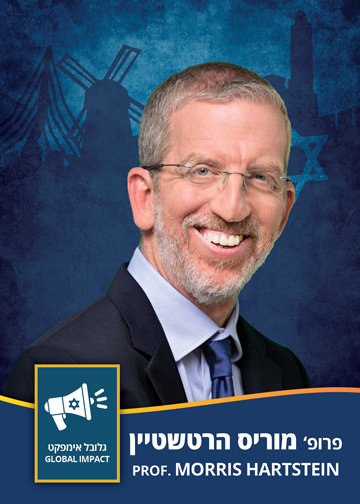 Prof. Morris Hartstein, MD, FACS, is a Clinical Associate Professor of Ophthalmology at TAU School of Medicine, Director of Ophthalmic Plastic and Reconstructive Surgery at Shamir Medical Center, and the Founding Director of “Operation Ethiopia.”

In 2014, at his children’s suggestion, their family of six went to volunteer in the Jewish community of Gondar, Ethiopia. Shocked by the abject poverty and lack of medical care, Prof. Hartstein returned to Ethiopia the next year, and over a dozen times since, to personally provide eyecare to the Jewish community and beyond. He has examined and treated 7,000 patients, overseen 700 sight-restoring cataract surgeries, and distributed thousands of eyeglasses and medications. Prof. Hartstein has brought 18 Ethiopian Ophthalmologists to Israel for advanced training. Together with SSEJ, he established a feeding program for over 500 malnourished children in the Gondar Jewish community.

Prof. Hartstein was invited to join President Rivlin’s delegation of the first Israeli Presidential visit to Ethiopia in 2018 and has addressed several Knesset committee meetings regarding humanitarian suffering in Ethiopia. In 2020 Prof. Hartstein joined Minister Pnina Tamano-Shata on a Diplomatic Mission to Ethiopia and accompanied new Olim back to Israel on the first Aliyah flight of Operation “Tzur Yisrael”.

A pioneer in his field, Prof. Hartstein lectures internationally, publishes widely, and his broad practice serves patients throughout Israel, including terror victims, Gazans, Hasidic leaders, Sudanese refugees, and more. Prof. Hartstein is married to Elisa, and they have four children, including three IDF soldiers.

Prof. Morris Hartstein, MD made Aliyah from Missouri in 2004. 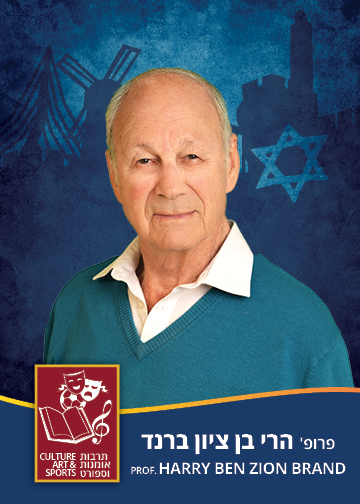 Prof. Harry Ben Zion Brand received a BA in Architecture from the University of Witwatersrand in Johannesburg, and later completed his diploma requirements in Town & Country Planning at the University of Durham in Newcastle and University College in London.

Prof. Brand has dedicated over 50 years to industrial development and planning within Israel. His contributions and innovations altered the Israeli architectural landscape, increasing accessibility, environmental protection, and worker productivity. He has played a significant role in the planning and building of some of Israel’s most important developments and infrastructures, including the Osem Headquarters and Logistic Center, Tefen Industrial Park, the Caesarea Business Park, the Jerusalem Technology Park, the Beck Science Center in Jerusalem, Nazareth Incubator Park, and many more.

Prof. Harry Ben Zion Brand made Aliyah from South Africa, via England, in 1962. 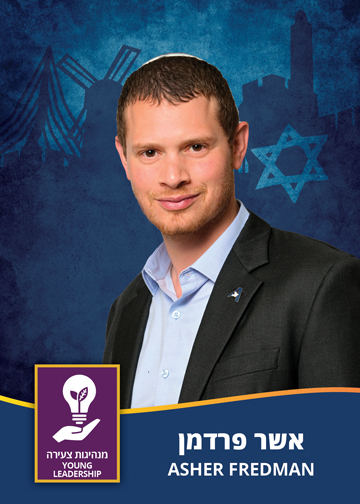 Asher Fredman serves as Director for Israel at the Abraham Accords Peace Institute, a non-profit, non-partisan US organization dedicated to strengthening and expanding the historic Abraham Accords. He holds a BA and MA from Harvard University in Government and Middle Eastern Studies and served as a Lone Soldier in the IDF.

He is the Founder of the Israeli-Emirati Forum, a grassroots platform bringing together Israelis, Emiratis and Bahrainis from diverse backgrounds. He previously founded Gulf-Israel Green Ventures, which focused on connecting the Israeli and Gulf climate-tech ecosystems.

Asher is a Fellow at the Kohelet Policy Forum, specializing in international relations, and a consultant and writer for several of Israel’s senior public figures.

Asher spent nine years in the Israeli Government, as Chief of Staff to Israel’s Minister of Strategic Affairs, Senior Coordinator for International Affairs at the Ministry of Strategic Affairs, and in the National Communications Directorate of the Prime Minister’s Office. In these roles, he worked on strengthening Israel’s public diplomacy and countering the anti-Israel delegitimization and BDS campaigns. He also served as International Affairs Advisor to Israel’s Public Security Minister, where he focused on international cooperation in combatting terror and incitement. Asher is married to Ester, and they have four children.

Asher Fredman made Aliyah from New York in 2008. 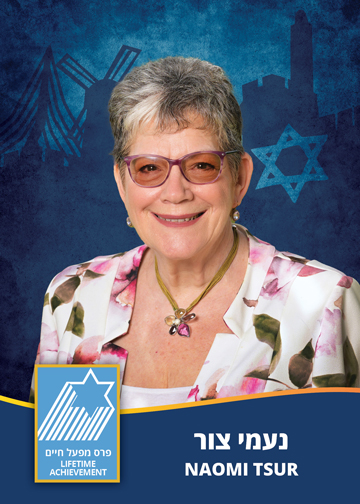 Naomi Tsur received her BA in Archaeology and Classics from the Hebrew University and studied towards an MA in Indo-European Linguistics.

Naomi has led countless green projects within Jerusalem and throughout the country. As director of SPNI Jerusalem, she successfully protected the Jerusalem Hills from unsustainable urban sprawl. Naomi led the campaign to establish Israel’s first nature park, the Gazelle Valley, inaugurated the Railway Park, and established the Sustainable Jerusalem Coalition.

Among her many achievements as Deputy Mayor of Jerusalem (2008 – 2014), Naomi opened up municipal committees to increase public transparency, implemented plans to preserve historical and environmental landmarks, helped design bike lanes in and around the city and promoted dialogue with Palestinians in an effort to treat the sewage flow in the Kidron Basin. Naomi established a new NPO in 2015, the Jerusalem Green Fund, a cooperative philanthropy, as well as the Sustainable Jerusalem Lobby, in which dozens of organizations work together towards a healthier, cleaner and greener Jerusalem.

Since 2014, Naomi has stood at the head of the Israel Urban Forum, working in collaboration with UN-Habitat and the Israeli Government to improve the quality of urban living. In 2021 the IUF hosted the 3rd Akko Convention on Urbanism.

Naomi lectures on urban sustainability around the world. She has received international recognition, including a certificate of appreciation from the Ministry of Education for contributing to building an exemplary society in Israel, in honor of the country’s 70th anniversary. Naomi was married to Haim z”l, a well-known violinist, journalist, and composer, and has four children and fourteen grandchildren.

Naomi Tsur made Aliyah from England in 1966. 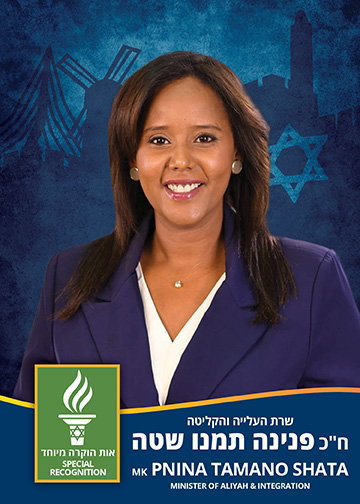 Minister of Aliyah and Integration, MK Pnina Tamano Shata was born in Ethiopia in 1981 and moved to Israel in 1984 during “Operation Moses”. She began her public service in 2000, when she led an initiative to improve the situation of Ethiopian Jews in Israeli society, and among other things became a prominent voice against discrimination and advocating for equality.

In 2016, she was awarded the Unsung Hero Award for over a decade of activism in her role as a Member of Knesset. She was also a recipient of the IFCJ award for her leadership in changing policy regarding the reduction of social gaps in Israeli society. In addition, she was recognized as one of the top 100 influential Israelis by The Marker magazine and in 2021 received the Begin Award for Israeli Leadership on behalf of her work for disadvantaged populations in Israel.

With the formation of the 35th government, MK Tamano Shata was appointed Minister of Aliyah and Integration, becoming the first Ethiopian woman to serve as a minister in the Israeli government and subsequently in Israel’s 36th government. As part of her role as minister, she led a variety of unprecedented achievements, including the Olim Habayta operation which rescued over 55,000 Ukrainian and Russian Jews in response to the Russian invasion; Operation Tzur Israel which approved the emigration of 5,000 people in Ethiopian camps; the Aliyah of over 800 men and women from the Bnei Menashe community of India; the removal of significant barriers facing new medical professional Olim; the reform to expand eligibility for Hebrew language learning studios; and the establishment of
a support center for Olim in multiple languages. During the pandemic, she also launched an economic emergency program for new Olim.

During her two-and-a-half-year term, MK Tamano Shata was responsible for the Aliyah of 105,000 newcomers from around the world, a historic record in the last two decades of Israel’s history.

She is the proud mother of two children and lives in Petah Tikvah.

Founded in 2002, Nefesh B’Nefesh in cooperation with Israel’s Ministry of Aliyah and Integration, The Jewish Agency for Israel, Keren Kayemeth Le’Israel and the Jewish National Fund-USA is dedicated to revitalizing Aliyah from North America by minimizing the financial, professional, logistical and social obstacles of Aliyah. The support and comprehensive social services provided by Nefesh B’Nefesh to its 75,000 newcomers has ensured that 90% of its Olim have remained in Israel.